IEC62133-2:2017 is the most well-known standard for exporting lipoly battery, including those used in IT Equipment, GPS, wearable products, smartwatch, Bluetooth devices, wireless sensors, tools, laboratory, household and medical equipment.

In February 2017, the International Electrotechnical Commission (IEC) officially released the IEC62133-2:2017, an international safety standard for lipoly battery products. This standard is mainly for the safety requirements of a single battery and battery packs and portable sealed only cell batteries and battery packs containing alkaline or non-acid electrolytes (including lithium ion polymer batteries, lithium ion(Li-Ion) cells, nickel-hydrogen batteries, nickel-cadmium batteries, etc.). The second edition will have some significant changes related to Lithium-ion Batteries.

The second edition of IEC62133-2:2017 have the most impact on lithium-ion cell manufacturers and dealers, it is also crucial for a company who use the lithium-ion cell. The changes related to lithium polymer cells fall into three categories:

The primary focus is to delete the items covered by the United Nations Manual Of Tests and Criteria(UN38.3). The tests removed are:
Vibration
Mechanical Shock
Low Pressure(Altitude Simulation)
Cell Protection Against High Rate Charging (not a UN38.3 test)

The most important of these changes are related to how the sample is prepared for testing. In the first edition of the standard, samples were charged at room temperature (20°C ±5°C) according to the manufacturer’s recommended charging method. The second edition includes two charging processes: one at room temperature, and one new program at high and low specified operating temperature ranges (10°C and 45°C if not stated). The new charging method also requires charging at the maximum rated charge current of the product. This process only requires samples at the cell level for short circuits, thermal abuse, crushing, and forced quick internal tests.
In the constant voltage test, a continuous low-rate charge test was corrected to a constant charge. This modified test requires the battery to be charged for seven days at the manufacturer’s recommended charge current and voltage limits.

Modifications to the crash test included clarification of the trial, indicating that the crushing only needs to be done along the broadside of the cell. Also, termination criteria for 10% deformation of cells were also added.
A more significant change is to divide the short circuit into separate parts of the battery and the battery. The second version of the lithium-ion cell was modified to contain only one test temperature and provide a more stringent range of circuit resistances.

The most significant change in the second edition is the addition of a new test——Forced Internal Short Circuit test. The test procedure very explicitly describes a method that requires the test facility to fully charge a Li-Ion cell, then open it and remove the jellyroll. Once the battery is removed from the can, a small Nickel particle of a specific shape and size is to be placed in a particular location of the cell jellyroll. Following the placement of the particle, the affected jellyroll is to be crushed.

Related to the cell level charging process changes, the lipoly battery level will have a modified charging process, but this will only affect the battery level of a test. This change comes from Japan’s lipoly battery and battery test requirements, and its states that samples used for short-circuit testing must be charged in an environment which is equal to the ambient temperature upper and lower: assumes 45°C and 10°C if not provided by the manufacturer. All other tested units on the battery level were charged at room temperature (20°C).

The subcommittee’s test requirements for lithium-ion batteries are more comprehensive than ever. Therefore, the amount of test required by IEC62133-2:2017 at the battery level has dropped significantly. The testing that has been completely removed as a result of this review is:

A new test has also been added to the battery level, designed to simulate the battery charging time longer than the manufacturer’s use of a higher charging rate. This test is performed on a fully discharged five battery packs, and the charge the batteries with a current of two times the rated current, and an upper voltage limit that is set to the maximum voltage available from the charger to the battery. If you do not know the charger’s maximum voltage, 5 volts per cell (or cell string) will be used. The current is maintained until the maximum charge voltage is reached and the temperature is monitored during the test. The termination of the trial is defined as the temperature is stable, the highest voltage is reached, with acceptance criteria of no fire and no explosion.

Tests Performed(name of test and test clause):
Tests are made with the number of samples specified in Table 2 of IEC62133-2:2017 (NEW).

Test Conclusion:
Lipoly Battery submitted by LiPol Battery Co., Ltd. are tested according to IEC62133-2:2017 Secondary cells and batteries containing alkaline or other non-acid electrolytes Safety requirements for portable sealed seconds cells. and for lithium-ion batteries made from them, for use in portable applications.

Lipoly battery cases and lithium-ion cells incorporate a pressure relief mechanism or are constructed so that they relieve excessive internal pressure at a value and rate that will preclude rupture, explosion, and self-ignition. Venting mechanism exists on a narrow side of pouch cell. Encapsulation used to support lithium-ion cells within an outer casing does not cause the battery to overheat during normal operation no inhibit pressure relief.

Terminals have a clear polarity marking on the external surface of the lipoly battery. The size and shape of the terminal contacts ensure that they can carry the maximum anticipated current. External terminal contacts surfaces are formed from conductive materials with good mechanical strength and corrosion resistance. Terminal contacts are arranged to minimize the risk of short circuits.

5.61 If there is more than one lipoly battery housed in a single battery case, lithium-ion cells used in the assembly of each battery have closely matched capacities, be of the same design, be of the same chemistry and be from the same manufacturer. Each lithium-ion battery shall have an independent control and protection. Manufacturers of lithium-ion cells make recommendations about current, voltage and temperature limits so that the lithium-ion battery manufacturer/designer may ensure proper design and assembly. Lithium-ion batteries that are designed for the selective discharge of a portion of their series connected lithium-ion cells incorporate separate circuitry to prevent the cell reversal caused by uneven discharges. Protective circuit components are added as appropriate and consideration was given to the end-device application. When testing a lithium-ion battery, the manufacturer of the lipoly battery provides a test report confirming the compliance according to this standard. The battery incorporates separate circuitry to prevent lithium-ion cell reversal from uneven charges as the pack is designed for the selective discharge of a portion of its series connected cells.

5.6.2 Design Recommendation for Lithium System Only

The manufacturer has prepared a quality plan defining the procedures for the inspection of materials, components, lithium-ion cells and lithium-ion batteries and which covers the process of producing each type of lithium-ion cell and lipoly battery.

8.2.1 Continuous Charging at Constant Voltage (lithium-ion cells) Fully charged lithium-ion cells are subjected for 7 days to a charge as specified by the manufacturer.
Results: No fire, no explosion, no leakage

Fully charged lithium-ion batteries according to the first procedure in 8.1.1, the batteries were placed in an air-circulating oven at a temperature of 75°C±2°C for 7 hours. Afterward, they are removed and allowed to return to room temperature.

The lithium-ion batteries were tested until not of the following occurred: 24 hours elapsed”

The ambient temperature of 20°C±5°C.
Fully charged lithium ion cells or batteries were dropped 3 times from a height of 1.0m onto a concrete floor. After the test, the lipoly cell or battery shall be put on rest for a minimum of one hour and then a visual inspection shall be performed.
Results: No fire, no explosion

Each fully charged lipoly cell, charged according to the second procedure at the upper limit charging temperature in 8.1.2, is immediately transferred and crushed between two flat surfaces in an ambient temperature. The crushing force was released upon: The maximum force of 13 kN ±1 kN has been applied.
Results: No fire. No explosion

The test was continued until the temperature of the outer casing: Reached steady-state conditions (less than10°C charge in 30 minute period), or Returned to ambient.
Results: No fire. No explosion

Regulations concerning the international transport of lipoly batteries are based on the UN Recommendations on the transport of dangerous goods. Testing requirements are defined in the UN Manual of Tests & Criteria.

LiPoly Cells or batteries were provided with packaging that was adequate to avoid mechanical damage during transport, handling and stacking. The materials and pack design were chosen to prevent the development of unintentional conduction, corrosion of the terminal and ingress of moisture. 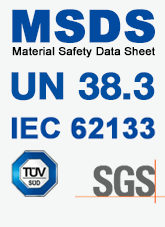